Along with ALL NEW The Cinnamon Bear Coloring Book, we’re also including these EXCLUSIVE BONUS GOODIES to help keep your kids engaged and busy all through the holiday season:

ALL 26 EPISODES OF ‘THE CINNAMON BEAR”!

This perennial favorite “old time radio” program has been enjoyed by children of all ages since it was first broadcast way back in 1938. It’s a 26 episode children’s fantasy adventure serial (each episode is just under 15 minutes long) meant to be listened to one episode at a time, beginning the day after Thanksgiving right up until Christmas Eve (though you can listen to it any time you want). And we’ll warn you right now: most kids just can’t stop at just one per day. This is classic children’s radio at its finest, a magical adventure your kids will love and want to enjoy year after year! 26 MP3 audio programs / Total Running Time: 6 hours 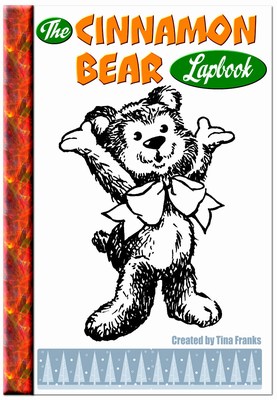 NEW! We are thrilled to bring you this brand new, professionally designed lapbook filled with dozens of fun and educational elements for young listeners to assemble & create as they follow the Cinnamon Bear’s classic adventures.

Now you can make “The Cinnamon Bear” a fun part of your homeschool fun, learning and craft activities… right through the holiday season!
PDF activity lapbook, 100 pages

We’ve created TWO fun games for Cinnamon Bear fans of all ages!
One is a fun racing game for the silver star, suitable for little ones through adults.
The other is a clever strategy game to corner the Crazy Quilt Dragon that will challenge even the cleverest of players. You simply print out the game boards and use a bag of M&Ms, Skittles or jelly beans (yum!) for the gamepieces!
2 printable gameboards with instructions, in PDF format

NEW! Do your kids love the wonderful songs and music in The Cinnamon Bear series? Well, we’ve put all the music together in one delightful downloadable “album” that you can burn to CD to enjoy anytime! Want to sing along? We’ve also got all the words to every song in our Cinnamon Bear PDF Songbook, so everybody can sing along!
14 MP3 audio songs + PDF songbook

What is The Cinnamon Bear?

The CINNAMON BEAR is the classic story of Judy and Jimmy Barton who search for the family’s Silver Star which goes on top of their Christmas tree.  They discover the star has disappeared from the attic.  Then they meet The Cinnamon Bear, and fly to Maybeland in his Soda Pop Airplane in pursuit of the Crazy Quilt Dragon, whom they believe took the ornament.  They meet a host of characters, including Crazy Quilt Dragon, The Wintergreen Witch, Fe Fo the Giant, and even Santa Claus.

Each 15 minute adventure in this 26 episode radio series is a cliffhanger.  Several times they recover the star, only to lose it again.  Eventually the star is found for good and they return home just in time for Christmas.

This classic story was written by Glan Heisch, inspired by the stuffed bear of his boyhood, for his daughter, Catherine.  Radio historians differ on the year of the first broadcast.  Some say 1937, others say 1938.  It would seem that it was “heard” several years before it was transcribed for broadcast.  Airplay would start just after Thanksgiving and run until Christmas Eve. But you can listen to these at your own pace all through the holiday season! (Warning: Your kids WILL beg for more, so use ’em as an incentive reward to get things like schoolwork and chores done around the house! ha ha)